If you look at trending news today, you’ll see a variety of articles with headlines like with “Yumi Stynes attacks Kerri-Anne Kennerly”, or “Today is exactly why I never let Yumi Stynes on Studio 10”, an opinion piece nobody asked for from Robert McKnight, previous Executive Producer on Studio 10.

From looking at these headlines, you might think that television presenter Yumi Stynes, who was a guest panellist on Studio 10, had violently and aggressively hurt her co-host, Kerry-Anne Kennerly – but this isn’t actually the case.

Here’s what really went down:

On Studio 10 earlier this week, a debate over Australia Day protests took place between Yumi Stynes and Kerri-Anne Kennerly. Kerri-Anne implied that Invasion Day protests were ignorant of issues such as Indigenous women and children being assaulted – an argument which itself has been slammed for ignorance. Yumi warned her, “you’re sounding quite racist”, to which Kerri-Anne responded that she felt “offended”.

Kerri-Anne’s quick leap to take offense was a clever diversionary tactic that has led to the media bypassing the actual issue at stake and targeting Yumi in exaggerated headlines. Whilst child assaults and the various inequalities faced by our Indigenous population are horrific issues which need to be addressed, we need to see these problems as a result of the systemic oppression and discrimination that this group of people have suffered since British settlement in Australia. This is why Invasion Day protests are something we need to support; something Kerri-Anne does not seem to consider.

Kerri-Anne was not trying to be racist. However, her insistence that Invasion Day protesters should instead have focused on a perpendicular area implies she may see her view (as an outsider) as superior to that of the actual group of people fighting for their own rights and recognition – even if this is unintentional.

This is white privilege at its finest. The television host displayed genuine ignorance regarding the context of the issue of Indigenous welfare in Australia. Kerri-Anne, as a white Australian woman, has not spent her life fighting systemic racism in the same way many Indigenous protesters have. She has no grounds to criticise their cause. Whilst ignorance is not a crime, white privilege allowed Kerri-Anne to jump to a simple conclusion on a complex topic. When Yumi told her she sounded racist, Kerri-Anne should have either rephrased her argument or unpacked her point of view further – jumping straight to offense railroaded an important debate. Although I believe Kerri-Anne did not intend to sound racist, it’s important to understand that not all racism is performed with intent, and in fact unintentional racism is perhaps even more important to call out for this reason.

“(Kerri-Anne) is just the voice of a long line of racist, ignorant rhetoric among the power elites”, said Indigenous photojournalist, Barbara McGrady, who attended a protest outside Studio 10 on Tuesday morning. 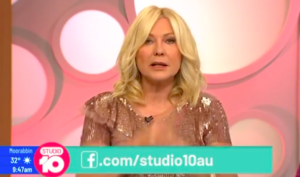 Seriously, the logic that undermines ‘Change the Date’ and protests Invasion Day is literally about valuing and respecting Aboriginal and Torres Strait Islander peoples, the hardships they have faced in the past and breaking down structural racism that causes the hardships they continue to endure and fight against today. Protesters are fighting to bring these issues to the forefront of the Australian landscape. Kerri-Anne’s comments implied to some that protesters who marched to protest Australia Day don’t legitimately care about the everyday struggles of Indigenous communities.

“You’re sounding quite racist” is hardly an aggressive sentence and I certainly wouldn’t refer to it as an attack – particularly when Yumi was calling out her co-host for generalising the issue, and racism. Yumi didn’t call Kerri-Anne racist, she warned that her argument sounded racist. Had Kerri-Anne heeded the warning and perhaps tried to reframe her argument in a more understanding manner rather than carry on about being “insulted”, the television host may have salvaged the situation – Yumi’s response was no crime.

This is a huge problem Australia faces – when an influential, white person makes a careless comment on national television– I’m sure Kerri-Anne had zero intent to cause offense or harm – and a person from a minority race calls them out, politely, the correct response is absolutely not “I’m offended by that.”

“That’s not to say heated debates aren’t a good thing on morning TV. Ita Buttrose and Jessica Rowe had some pearlers during my time there, but they were always done with respect and never ended up in name-calling with labels like ‘racist’ being thrown about. Labels like that have the ability to damage a career and it looked like Yumi just didn’t care.” (Robert McKnight, previous executive producer of Studio 10).

There is so much wrong with this statement. When Yumi called out Kerri-Anne for her ignorant remark, she was not being disrespectful. “Racist” is not a name-calling label, it is not usually used as an insult; it’s a term used for someone who feels or suggests discrimination against another race – which Kerri-Anne did, regardless of whether she meant to or not. Racism is not always active, and it can be a passive process; having it called out on national television is a great thing. When McKnight accuses Yumi of throwing Kerri-Anne a label that might damage her career, he completely misses the point.

Indeed, some online protesters have called for Kerri-Anne’s resignation, but this is a result of her own words that offended the Indigenous community and its supporters – not because Yumi Stynes called her out for being racist.

Both women have been vilified by online trolls and remain the subject of much criticism for the onscreen encounter.