As a young girl, I would often take a family caravan trip in the summer holiday period. They were a lot of fun and definitely a highlight of my childhood. We would play cards, go for swims, get fish and chips; it was like a little kid’s dream holiday. However, you have to agree that being trapped in a small, confined space like that for sometimes over three weeks at a time will definitely push some buttons. As someone who’s spent more than enough time travelling parts of Australia in a caravan, I felt really connected to Caravan’s concept of extreme emotions flying and true colours rising to the surface in a caravan scenario. And why? Because caravan holidays are undeniably authentic and seriously constricted in space. It can bring out the worst in you, and those you’re travelling with. 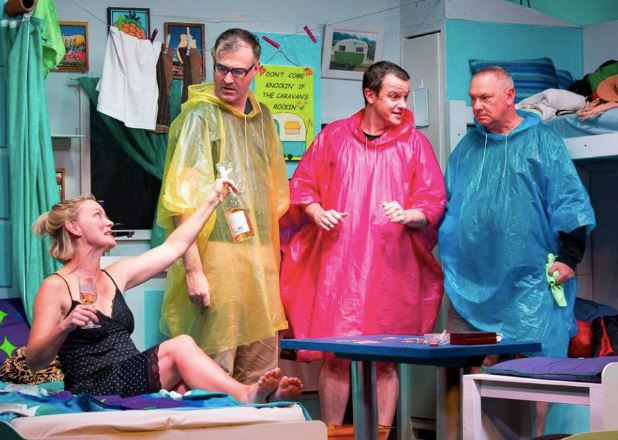 Caravan is a play about an unhappy married couple in their forties: the high-strung Penny and the hot-headed Parkes (who clearly haven’t have sex in yonks!). They are on their annual boring as bat-shit caravan holiday, this time with their best friends – Monica and Rodney – as well as Pierce and his latest girlfriend, Gwendolyn. Monica is eerily similar to one of your mum’s friends; she drinks heavily and huffs and puffs at any minor thing that doesn’t go her way. Rodney is the beta in the relationship. The other couple is Pierce and Gwendolyn; hilariously in denial of the time limit they have on their relationship, because Pierce is 40 and known to frequently recycle girlfriends, and little Gwen is merely 22 and reminds us of the friendly girl we went to school with who was ‘totally spiritual’ and just wanted to spread the good word, but you still wanted to punch her. They’re incompatible.

Caravan, directed by Joy Sweeney, was a refreshing production. Especially for we millennials. Our generation has a much higher exposure than those previous to Britain’s high-witted, dark humour, and America’s physical, self-deprecating and surreal drive.  We’re well-versed with the typical Hollywood formulas to create a story. Ultimately, we have less exposure to local Australian content, which really is a shame. Caravan is a classic Australian dramadey that borrows elements from some all-time-favourite Aussie classics. There were connections to failed relationships from Puberty Blues, and familiar humour from The Castle. Caravan was a simple play with clear themes and concepts, and that’s what made it truly engaging. The cast also completely nailed their character profiles that felt deeply, and annoyingly, relatable. 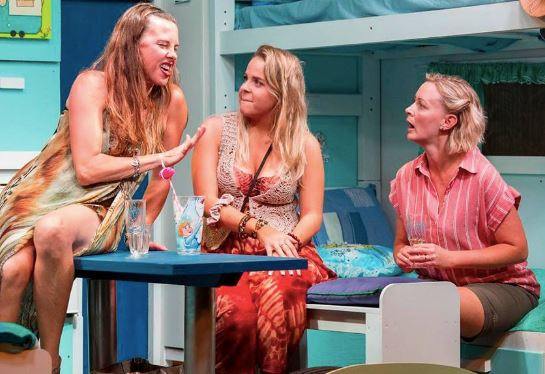 There were a lot of believable parts of the play that hit me hard, like betrayal and complex relationships. The actors also collaborated well to define these issues quite simply and obviously from the start. Actress Vanessa Merewether played Penny, the worry-wart who was constantly thriving for peace and harmony between everyone on the holiday. She did a great job of maintaining a high level of energy and expressing her neurotic and nervous nature. There were moments where a slight over-play of character evolved, but a theatrical approach doesn’t really hurt when it comes to theatre! Martin Maling, who portrayed Parkes, expressed a lot of anger onstage. This is a tricky one for me because personally, I find it the hardest to believe when characters are showing anger, in any form of performance. All emotions are a challenge to convey, but anger really stands out for me. I can say that Maling displayed the classic ‘Australian dad’ hot-headed approach onstage, and that came across as real and relatable. Their connection onstage felt genuine, with lots of energy on both ends; however, at moments it felt like two people were just screaming and yelling. So, in saying that, I think Merewether could have underplayed her role just a bit in to make her appear more inferior to Malin’s character, to show the comparison in status and personality types.

Monica and Rodney’s relationship was a little harder to read at first, but for a reason. Both actors did an exceptional job at portraying exactly who they were and their purpose in the story. Karen Pattinson, who played Monica, had great moments throughout the production where she followed through with hilarious backhanded facial expressions. Her mannerisms and body language were her strength; she had a way of moving on stage that was captivating. Rodney, played by David Allsopp, did a great job at playing the ‘average’ character; the one who had the most ‘normal’ attributes. He was a nice and necessary break from all of the strong characters. Pierce and Gwendolyn were a great duo onstage. Pierce, played by Peter O’Sullivan, flowed well throughout the performance. His voice was probably the strongest in the cast. He and Chelsea Cunningham, who portrays Gwendolyn, were so great at underplaying their characters; their perception of their roles as Pierce and Gwendolyn worked well in the play because together they appeared to have a real connection and flow onstage. Cunningham was absolutely hilarious. I’m friends with her, but all bias aside, I can confirm the audience also agreed. She takes a fresh twist on her character’s ditzy and innocent nature. She does this via a raw, passive-aggressive tone in her voice which was a fresh and surprising twist on her role and gave the play a little bit more edge. My jaw literally hurt after the play had finished because I had laughed and smiled too much. Her physical performance in the final scenes would be a challenge for most actors; however, Chelsea orchestrated her performance beautifully, and again, never taking over the other strong personalities on stage.

Even though this play is about 87 per cent made up of people in their forties, I can see how this play is just as relatable to us as it would be to our parents. The driving force of the production is the dynamics of friendships and romantic relationships. Yes, they may be married and have kids, but their concerns and struggles are eerily similar to what we face in our own relationships today as young twenty-somethings; and definitely something we hope we do not face in our marriages or any form of relationships as we grow older! Really though, if you liked the classic relationship dynamics between the parents in shows like Puberty Blues and most other Aussie dramas, you’ll enjoy Caravan, without a doubt!

Caravan is playing until April 20th 2019 at the quaint little Theatre on Chester. You can buy tickets here.