The moon is a symbol of spirituality, and an object of what seems like eternal speculation. There are so many myths and conspiracies that it’s difficult to know exactly what to believe. What we do know about the moon for certain is that it’s round, white-ish, and kind of far away. Everything else is pure speculation – and science, of course. But in the age of climate deniers and anti-vaxxers (read: let’s stop voting in fucking Geminis to parliament), science is evidently an expired fad. It seems as though we earthlings have not believed in science since 2010.

So, for the purposes of this article, we’ll follow the example of the sacred Australian Liberals and push science aside, to examine six myths and conspiracies surrounding the moon: 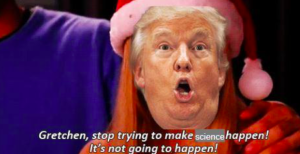 The word “lunatic” is derived from “lunar”, which means of, determined by, or resembling the moon, according to the Oxford Dictionary. Therefore it’s perhaps unsurprising that the strong ability for full moons to drive people batshit crazy is a pretty widespread belief. For millennia, full moons have been associated with bizarre, dark and often violent behaviours, such as suicide, sleepwalking and sporadic violence. Many emergency room doctors, police and other public servants will report more accidents and strange injuries during the full moon than other times of the month.

During 1700s England, lunacy was an accepted partial defence to murder in the court system, if the crime was committed under a full moon. The lunar insanity myth has been widely disputed by science yet remains a reasonably widely held belief by the populace. As a retail worker who sees a spike in customer entitlement and insanity as the full moon passes, I’m not putting this myth to rest any time soon.

Aliens on the moon

The aliens trapped in Area 51 had to come from somewhere, right? Well, some conspirators claim that the Earth’s moon is actually an alien space station that is monitoring us. Spooky, huh. Scott Waring, a key conspirator in the area and self-proclaimed UFO researcher, noticed that NASA deleted two images of the moon back in 2013. The images allegedly showed an alien spacecraft ‘exiting’ the moon.

“The moon’s surface appears real, but . . . the surface can open up huge doors that allow ships to exit and enter at any given time. How do you think the public would react if they knew the moon was not real, but an alien space station with its surface covered with debris to make it look like a moon?”

Waring claims NASA deleted the two images to hide the existence of aliens:

“That’s why NASA exists, to control what the public knows.”

The moon and fertility

Most modern medical experts believe there is zero correlation between fertility and a full moon. However, because menstruation cycles and the moon cycles can be similar, many people believe that the moon does actually affect fertility. Historically, many societies believed that it was easy to conceive during a full moon. Despite a lack of evidence, some also believe that full moons can bring on labour.

How does the moon actually affect our fertility? The argument in support of the myth is that exposure to light increases our levels of FSH, which matures the eggs in our ovaries. Pre-electricity, the full moon was the only light source at night, and thus it was once the optimal time of month for conception.

The US moon landing conspiracy

Five per cent of Americans reportedly believe the 1969 Apollo moon landings were faked. Despite overwhelming evidence on the contrary, legend tells that NASA staged the whole event. One of the more popular arguments in support of the fake moon landing is that the US flag fluttered on the moon’s surface, which doesn’t make a tonne of sense – there’s no atmosphere nor wind in space, right? The rebuttal from authorities is that the flag had a metal rod sewn to it to give an illusion of fluttering; the flag drooping around its pole would make for a poor photo op.

The moon is made from cheese

I hate to break it to you and destroy your childhood dreams, but all the evidence suggests that the moon is not made from cheese. If it were, the US moon landing would’ve been Gouda (heh). I wonder what music the astronauts listened to as they landed. R & Brie? Okay, I’m going to move on.

Supermoons are a threat to humanity

A supermoon is when a full moon occurs at the moon’s closest orbit to Earth, giving the illusion that the moon is bigger than usual. They usually only occur several times a year, if that. The moon being closer and larger has led conspirators to believe a supermoon causes natural disasters, given its stronger gravitational pull on the earth. Supermoons have been linked to tsunamis, earthquakes, and even the return of Jesus. Numerous scientific studies have been undertaken on the issue, with no conclusive evidence found.

The moon has been tied to superstition and spiritual practice for as long as humans have existed. No matter how many times science disproves a lunar theory, many of these conspiracies and myths are standing the tests of time. Do you have reason to believe in any of these fun myths? Let us know in the comments below!