Venturing to my local grocery store in the past felt like going to a safe heaven. It was a place where I could put on my resting bitch face, go through aisle after aisle of delectable and delicious goodies and find myself some treats to get me through the week. The best part was the minuscule amount of human interaction needed to get through the whole shopping experience. Self-serve checkouts are my saviour. Their existence is as widespread as the shittier tasting ice creams (yes, I have taken inventory of them), thank you technological gods of our time. However, this all changed when the Ooshies and Coles’ Little Shops attacked my personal space, news feed and self-serve checkout menus.

No Karen, I don’t want to collect the Ooshies that I’ve ‘earned’ from spending over $50 on biodegradable tea bags. Now, since the Ooshies and Little Shops have arrived, my sanctuary of peace and prosperity has turned into my own personal hell. Every mother and their dog want to get their acrylic-nailed hands on these single-use plastic shit stains on society. Needless to say, I’m pissed, and a tad irritated that these weren’t around when I was a kid.

Little Shops started as a promotion back in July 2018 as a tactic to distract consumers from the whole plastic bags ban fiasco. I find this whole concept infuriating due to the fact that Coles tried to take a responsible approach to minimise their single-use plastic waste to then introduce a single-use plastic item as a part of their marketing. The worst part about this whole situation is that these collectibles will more than likely end up in landfill when the collectible frenzy turns into a crisis and children aren’t obsessed with their mini bloody TimTams anymore. It’s great marketing and people went gangbusters over such an ingenious PR trick that had Australia in a spin. Actually, I don’t think we’ve stopped spinning over these stupid little things.

We are obsessed with these collectible, tiny items and plastic animals that get us all in a terrible state of mind. Should we really be exposing this kind of behaviour of obsession to children? Speaking of, will somebody please think of the children here?! In its most basic form, this style of collectible marketing is gambling where big companies are cashing in on the innocence of children. Woollies’ ‘family friendly values’ are nothing more than a ploy to lure children into their stores so that these kids can pressure their parents into buying more products to meet $30 threshold to get more bloody Ooshies. I see children throwing tantrums in stores because they NEED to get their hands on that golden freaking Simba that sold for $100,000. I understand their pain as Simba is the hunkiest of all Disney princes, but I would appreciate it if these Ooshies would whoosh out of our lives – for good.

It’s not only me that has a problem with these little spawns of Satan (no I’m not talking about the children here), but so many people on Twitter have chimed in on the issue with some of their reactions being hilarious. 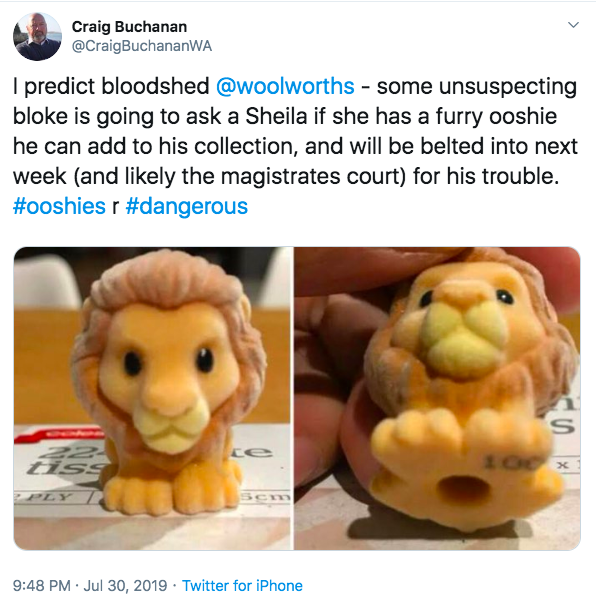 If we fast forward to our current, shitty position as Australians, being lead to the slaughter by our government and money-hungry grocers, you’ll find that the second season of Little Shops has taken us by storm again (you’d think that maybe global warming would be the cause of some public action or buzz, but nope, just a casual storm from plastic toy lions of varying colours).

The Ooshie phenomena is coming to a close with Woolies actually taking responsibility and utilising green marketing to show that they actually do care about the environment. This, of course, is after sending copious amounts of single-use plastic out of their stores and, most likely, onto our shores and garbage dumps. The fresh food people are giving children the opportunity to grow their own fresh foods in biodegradable pots with an initiative called the ‘Discovery Garden’. In this respect, it will be nice to see children eagerly trading packets of seeds containing healthy foods with hustle and gusto rather than swapping plastic lions, tigers and pumbas, oh my. It’ll be interesting to see if rare watermelon seeds fetch the same price on ebay.

Until the end of time, I will ask whatever happened to those stickers that kids collected to get more money for their schools and education. Education is the answer to everything people, not tiny TimTams. If I’m going to commit to being a fat bitch for the day and devour a bloody packet of TimTams, it better be full-size and be chock-full of chocolatey goodness.