Well, it’s been fun people, but seven episodes later and we’re finally here. It’s the end of the experiment and decision time for the couples and nail biting, edge-of-your-seat drama for you. Well, relived through me who is vicariously living through the relationships of other. You’re welcome.

With D Day approaching, Xavier decides to pull out all stops and take Simone on a date …to a soccer game. Yes, this should give her the romance she craves. Luckily, Simone is trying to be optimistic and is attempting to hype herself up, which shouldn’t be too hard considering her low expectation starting point. “My levels of excitement today are probably a 5/10. That’s not very excited, is it?” No, Simone. No it’s not.

Xavier insists it’s romantic since it’s “not something [he] would invite just anyone to,” despite the fact that it’s a public event and they’re surrounded by thousands of strangers.

On her last night in his house, Xavier makes a last ditch effort and splurges on some Woolies flowers and Crust pizza, to really woo his lady. Now is truly the 11th hour…

In the country, Mark tries to pull some magic trick mumbo jumbo by setting up a beautiful picnic in his field for he and Christie. Obviously trying to create some sort of optical illusion to confuse Christie into miraculously loving the country, he rolls away a bale of hay to reveal his surprise. Christie loved the picnic, but remained unconvinced on everything else.

Their relationship is actually really sad since they seem to genuinely like each other so much and are just victims of circumstance. If a shitty highschool drama club doesn’t adapt this into Romeo and Juliette then honestly, what exactly ARE we teaching the children of today?

In a display of absolute, miserable love, Mark says that he wouldn’t want to be with Christie if it meant she was unhappy at the farm. “Even if that means saying goodbye?” Asks the offscreen Channel 9 lackey. “Yea. Even if that means saying goodbye,” he solemnly replies. The next five seconds are a slow zoom in on Mark’s watery eyes, just in case you weren’t feeling COMPLETELY sad for the guy.

Everyone’s just kind of bummed out, even my favs, Erin and Bryce. While still maintaining their delightfully witty banter, the two have a kind of melancholy tone and it’s totally harshing on my vibe, man. Erin laments, “I hope he’s not upset about this whole children topic.” Aw honey, it’s kind of a big deal.

Now, after being with each other constantly for a month, the couples must move back out to their own places for a week and regroup for their final decision.

“NOW THEY MUST DECIDE WHETHER TO STAY, OR WALK AWAY,” screams Channel 9.

Enter our first couple on the chopping block: Simone and Xavier. 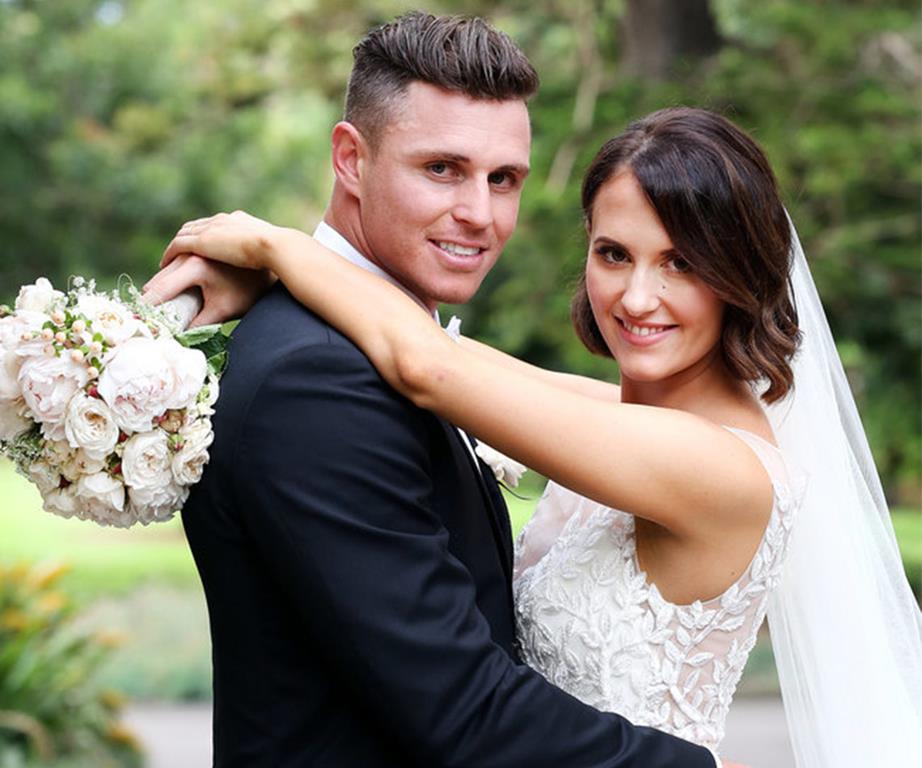 On the morning of

decision day, while Simone is questioning the fundamentals of her relationship, Xavier ponders the hard hitting issues: “if I wear a gold watch, does that look weird with this ring? See, I need a woman’s opinion in this house.” Yes, Xavier, it does look weird, and so does you dumb face!

In the room with the love experts, it’s pretty obvious Xavier is still keen, saying how much he’s loved his time with Simone, how she’s taught him to grow as a person, and generally what a great gal she is. So, it’s left up to Simone to make the decision.

“Xavier, the last month has been so amazing. You being my perfect match, it’s so clear to see we’re so compatible on so many levels,” she begins. “I’ve given my 100% from the start and I’ve made you a priority not because I felt like I had to but because I wanted to make you a priority.”

Someone practiced this in the mirror this morning.

“So today, I’m so clear on my decision that I’m going to walk away from this relationship, because you can’t give me those things. You’re not ready to give me any of those things.”

AWWWW SHITT!!! Just like that, the dream is over. Xavier insists this will really inspire him to better himself, which probably just means he’s gonna watch more footy tbh.

Next up: Erin and Bryce

I actually can’t deal with how nervous I am for these two, I feel I may actually be more invested in this relationship than my real life one (sorry honey!)

Erin is FREAKING OUT! “What if I get there and he’s not excited to see me?” Erin wonders as she spirals into every person with anxiety’s worry hole. She’s actually breaking out in a huge rash and I’m beginning to worry Bryce won’t be able to work out where Erin ends and the red dress begins. “I’m pretty shit scarred for lack of a better word,” and really, when she’s summed it up so eloquently, why would you need a better word?

When Bryce walks in he looks pretty somber and when asked about their relationship he brings up the fact that they have different goals and disagree on children. Ruh-ro Erin, this could be bad

Erin begins: “in the begging of this experiment I was fairly scarred and apprehensive but since meeting you, not only has our relationship developed but I’ve developed as an individual.

of reflection over the last couple of days, I’d really like to continue this relationship.” YASSSS ERIN! YASSS!

Now it’s Bryce’s turn. He begins a long speech on how they’re at different points in their lives and how he’s worried that they have different ideas about family …BUT “at the end of the day, that stuff will come when it comes. When you moved out the other day I was so sad, and that’s when I knew I needed you there.” OMG IT’S HAPPENING! “I want to continue as well.”

When Bryce told Erin there was a hole in his life without her #9Married pic.twitter.com/KfhNEPDja6

At this point I’m literally screaming with joy and my mum (who is my reviewing companion) looks like she’s going to cry. And then, just when we thought it couldn’t get any better, Erin’s reaction is just perfect!

The two are apparently “on the love train headed to love station.” This is legit the best news I’ve heard all day. What is my life?

Finally, we have Mark and Christie.

With 1000km between, it’s a wonder why they don’t just move, ay? But then again Mark is basically a mystical creature, like Pocahontas, and if you take him out of nature and into the city he’ll die, like Pocahontas. Would Christie be willing to move?

Christie confides in the experts that she’s “never been with a guy where I look at the future. And I do with him. … He just fits in.” Yea, Christie, expect for the fact that you would have to make a choice between your life in Sydney and your life with Mark.

Away from Christie, Mark reveals that he thinks that he would be sacrificing more than Christie, which is a little rough. Things aren’t looking too good as he sits down beside her…

“I really like Christie but…” My mum sucks air through her teeth and Christie is settling in for the hurt. “I’m really worried I’m not going to find happiness outside the relationship in Sydney.”

Christie is the first to say whether or not she’s still keen.

“It’s been really tough not being able to speak to you for two days … I actually couldn’t get you out of my mind. But I know we have this massive hurdle.

“I’m definitely 100% not gonna let you go.” This is it! Christie is committed! Mark responds with a telling “that’s really kind.” Ummmmmm?

Mark: “It has been a tough decision … I think you’re awesome … but obviously we come from two different worlds.

“I feel like I have to give up my life in order for us to be together. You are an amazing person but …I can’t let you go either.” OOOOO, WHAT A TWIST! I did not see that coming at all and I was kind of wondering

if he just decided that on the spot. Either way, The Farmer Wants a Wife just lost a valuable contestant.

Two months following the couples’ decisions to stay together, Married at First Sight caught up with them to see how they were going.

I’m happy to say that ERIN AND BRYCE ARE STILL TOGETHER! TRUE LOVE IS REAL! “Fuck we’re cute.” Yes, Erin, yes you are! Erin has come into her own as a total grown up now, giving hope to “woman-child”s all over Australia. But she still calls her mum for cooking.

The two seem very settled with each other and genuinely fans of their experience. “I would definitely recommend this experiment to anyone out there who’s looking for love,” Erin says. Unless your name is Clare or Jono.

Clare has #noragrets and has even picked up an extra rescue dog which requires constant nappy changing. She has totally moved on and is “living the dream”. Jono is also doing fine, and is still a footy loving, Fitzy impersonator (seriously, take this up as your new career, Jono).

Reflecting on their relationship, it’s good to see the two are as mature as ever. Jono says “at certain points I felt like I was one of her rescue dogs and she was trying to train me into what she wanted.”

“Well if he’d only listened to me look how much better the dog is,” Clare mutters. Oh you two!

And, good news Sydney-siders, you can now get an Uber ride from Clare! Just maybe don’t mention your fear of crocodiles…

And, more good news, Mark and Christie are still together! They’re both in their own places but they’re just living with the commute. Eventually, Mark plans to move permanently up to Sydney, but only when Christie gets a yard and 20 chickens.

Well, that’s another season of artificially-constructed-love done and dusted! Recruiting has already started for net season, so that’s something to look forward to in our bleak meaningless lives. Oh, is that just me? Most important to note, however, is the fact that with two out of four, the odds have drastically improved!